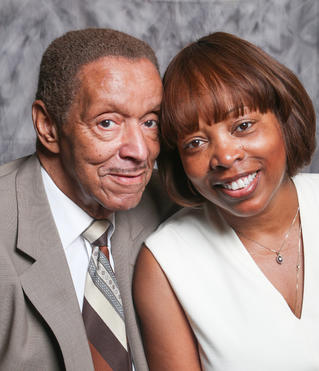 As the grandson of the founding Pastor of Gethsemane Baptist Church, the Rev. James T. Harvey, he was both nurtured by and served Christ at Gethsemane until he graduated at the top of his class from the Howard University School of Divinity. In addition to being the Pastor of the Junior Church, he assisted the sexton, played the piano in support of the mission circle meetings and the Sweet Hour of Prayer before Communion Services, ushered as a junior usher, and sang in and assisted the director of Choir No. 2.

Before becoming Pastor, he served as chaplain to migratory agricultural workers in upstate New York and as Director of Christian Educational Activities at Mt. Carmel Baptist Church, under the leadership of the late Rev. Dr. W. H. Jernagin, President of the National Sunday School and Baptist Training Union Congress.

Other than Pastoral ministry, he was a faculty member at the Washington Baptist Seminary for ten years, an executive director of the three multi-service anti-poverty programs in the early sixties and seventies, the leader of the $5 million Anacostia Community School Project, President of the first elected DC Public Schools Board of Education, Ward 8 Representative on the first elected District of Columbia City Council and a staff chaplain/therapist at St. Elizabeth’s Hospital.

Current, he is a clinical member of the Association of Clinical Pastoral Education, a Licensed Professional Counselor and member of several boards and commissions.

After working to acquire nearly five acres of land adjacent to Bethlehem, he is currently leading the congregation toward the building of a Multi-Use Development Project, inclusive of: a new church sanctuary with an adjoining cultural arts and educational facility, a six-story office building for leasing to governmental and private business entities, street-level retail and commercial spaces, market-rate condominiums and low-income housing overlooking the Anacostia River – with views of nearby Virginia and Maryland. This project will include 300 underground parking spaces.

He is married to Marcia Hall Coates, a retired Federal Government Senior Executive Service career employee, with whom he shares the parenting of four children, eleven grandchildren and four great-grandchildren.